More than a decade ago, there was a short-lived campaign put out by the Autism Society of America called something like “THIS is the Face of Autism!” Below the headline was a picture of someone who looked very challenged, suggested as non-verbal autistic, and according to the stereotypes of the time (ok, in some corners, today still), the pictured person was interpreted to be psychotic, deranged, shattered and soulless. It was very reminiscent of Harold Koplewitz’s “Ransom Notes” campaign, and Autism Speaks’ “I Am Autism” video.

The campaign didn’t last very long. Mel Baggs quickly killed it. Mel, being nonverbal autistic (and who used the pronouns “sie” and “hir”) took a self-portrait in a similar pose…

…and posted it with the following text, typed with the communication device that sie blogged, emailed, and socialized with…

“This is what I look like when I’m trying to relax, or zone out a little, or shut off vision so that I can hear what is going on around me. I have no doubt that someone could use this image to show the tragedy and despair inherent in autism . . . Black-and-white images such as these, and the captions that go along with them, are designed to create a reaction. Most often, disability organizations, run by non-disabled people, use them to elicit pity — and money, at the expense of the truth. Look at the autistic person in her own world, they say. Isn’t it tragic? What I am doing in this photograph is no different than someone curling up with a good book to unwind after a long day . . . Some autistic people would even say that it’s bad to publish pictures that look like this. Better to publish the ones that make us look like real people. Those are the better pictures…I say that plays straight into the hand of people who think there’s something wrong with the way we look.”

Credit ASA for learning quickly (Koplewitz has never apologized, and Autism Speaks has not purged their video off the net). But credit Baggs a lot more, for teaching us that so-called non-verbal folks were capable of having deep, internal lives full of intellect, care, sexual appetite, the ability if not potential to communicate, and most importantly, the soul that so many before denied Mel, and others like them.

With Mel’s permission I have relayed that above photo (and text) to audiences in almost all of the 200-plus keynotes and workshops I’ve done since sie gave me the green light.

According to Laura Tisoncik, Mel Baggs’ friend, writing on Baggs’ Facebook page, sie died less than a week ago, indirectly from COVID-19. Baggs had multiple, complicated, and serious medical issues that kept hir movements outside the home extremely limited, and most of the time unable to travel. Recently, according to Tisoncik, Baggs was released from another hospitalization—but this time sooner than they should have been because the hospital needed the bed for C-19 patients. Mel died too young of respiratory failure.

Baggs was a pain in my ass when I first met and got to know hir back around 2005. Always on about what sie was against, never about what sie was for, Mel frequently contacted me when I was running the world’s largest membership organization for adults on the spectrum (GRASP). Baggs poured over our website, denouncing our decisions on what to link and what not to link, or critiqued some of the language I was using in my essays. But the “pain” part was that sie were always right.

We got closer in 2007 when the vaccine theory folks just went full on in accusing Mel of fraud. They ridiculed Mel for hir weight, for Mel’s discussion of hir sexuality (“You’ll never have sex! Who cares? Ew“), calling Mel a faker, an actress, who was just making all this up, pretending to be non-verbal and disabled. I wrote Mel: “You hit a nerve, (Mel). Nice job…Want some help?” But Mel really didn’t. Mel was used to it all. Mel was tough as nails, having already been through the fight over facilitated communication’s very legitimacy. But as a result of my reaching out, we were closer, and a year later sie trusted us enough to ask for real help when Mel’s services were threatened with being cut. I was warmed that I had been asked.

Why the parents of non-verbal children weren’t lined up for blocks, seeking to learn from Mel…was beyond me.

I could go on. But I’ll let Mel Baggs take over. For Baggs not only gave us years of writing through the blog, Ballastexistenz, sie also gave us perhaps two of the greatest films ever, however short, about the subject of autism. In the 8-plus minute, “In My Language,” stick around to 3:15 to really learn something.

And let’s remember Mel in the 2+minute “Happy Dance.”

(Can’t resist one more item. Mel’s T-shirt in this photo reads: “Noncompliance is a social skill“…) 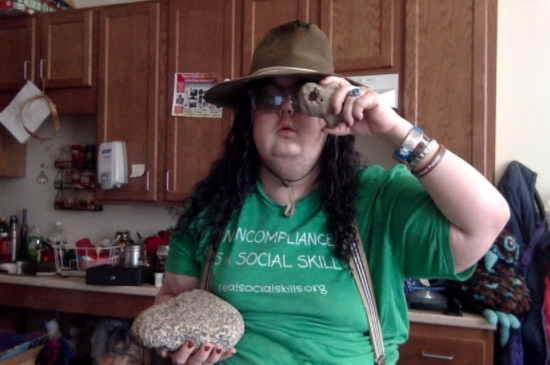